Last month I bought a few guitars to add to my collection. One in particular was a Jackson JS32T Rhoads, a cheap Flying-V style guitar. I decided to make this my project guitar and replace the cheap parts with better ones.

I’ve upgraded the stock pickups (which sucked like no tomorrow) with EMG HZ (passives) H4 on the bridge and H4A on the neck. The pickups are not the best I’ve ever used, but at €55 each and with their absolutely perfect solderless system they are a great investment, though to be honest in my next project guitar I’d rather use Seymour Duncans or EMG Actives.

I’ve upgraded the nut to an Earvana one. It’s relatively cheap and it helps solve the intonation issues caused by the first fret which drive me absolutely nut, especially when going from an A chord to a D one. I highly recommend one, however if you are happy with the intonation of your guitar I’d recommend a Graphtech TUSQ (XL) nut.

I was between Schallers and Planet Waves. Schallers are good but rather expensive and Planet Waves have a clever system of cutting the excess string when tuning, which, while it sounds good on theory, if you manage to screw up and you need to reattach the string, you’ll have to replace it.

Then I came across this: 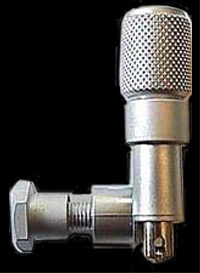 That’s an LSR Tuner and this is how you attach it to the guitar: The way this works is that the exposed metal pole part on the previous image has a hole for the string like a regular tuner. However, unlike most tuners out there it uses no gears to tighten the string. Instead, you press the string part of the tuner and start twisting the knob until it recedes inside the tuner. Doing so, tightens the string by creating friction between the pole and the casing of the tuner as well as a pin pushed down by the screw in the knob.

The idea is good and the tuners are very very precise. The implementation is far from perfect however. The thumb knob exposes the screw inside it as shown (not very well I admit) in this photo:

There is a hex (or Allen, not sure) recess on the head of that screw which you use to fasten the pin to the string. The problem is that the metal of the screw is too soft and it’s very easy to damage the head. You absolutely need to tighten the screw to the string because when tighten the thumb knob, otherwise your string will get out of tune.

When using Sperzels, Schallers or most other kinds of non-automatic locking tuners, you get a large thumbscrew that’s only used to tighten the pin, plus the knob that actually winds the string. In this implementation you use the thumb knob to “wind” the string and the little screw inside the knob to act as a thumbscrew.

As a matter of fact, I managed to almost smooth out the head of one (more like 4) of the tuners. Changing strings 2 more times may lead me to jury-rigging the screw with an ugly custom implementation of some kind; I’m thinking of attaching proper thumbscrews to the tuners when that happens, though I admit it will look worse.

Would I recommend these tuners? Not sure. The implementation is lacking, but when you manage to tighten the strings properly, the tuning precision is greater than even the best Schallers out there (similar to Steinbergers actually). Unfortunately, it’s almost impossible to find these tuners anywhere due to them being out of production for some years now (I might have bought the last set in Greece). To be honest, while they look different and awesome, you’ll have way less problems with a set of Schallers or Sperzels or Planet Waves.

Update: I wrote about LSR tuners because there seemed to be a general lack of information on the Internet about these tuners. In the end, my advice is to stay away. After having one of the tuners finally broken down, I’ve set them aside until I can think of a way to weld a thumbscrew in the problematic area and replaced them with Schallers.